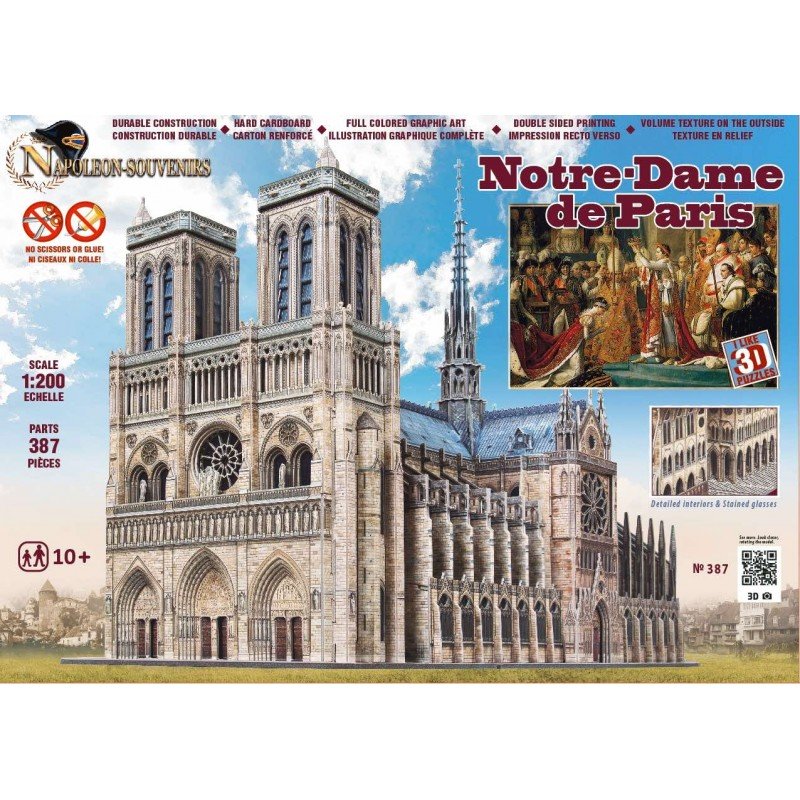 1:200 scale Notre-Dame 3D self-assembly puzzle made of 387 pieces with every architectural details and stained glass. Made of high quality cardboard, it can be assembled without glu or scissors. Total length 63cm, total height 45cm.

By buying this product you can collect up to 5 loyalty points. Your cart will total 5 points that can be converted into a voucher of 2,50 €.

Spiritual heart of medieval Paris, Notre-Dame de Paris was built on the site of an old cathedral dedicated to Saint-Etienne that had become too small for the growing population of the city. Under the leadership of the bishop of Paris Maurice de Sully, construction began in 1163 and the stones of the old cathedral were used in part to build the foundations of Notre-Dame. The newly emerging Gothic aesthetic is expressed in most aspects of the new cathedral which is already reworked (enlargement of the openings) while it is not finished. The end of the construction, with the completion of the north tower and the installation of an arrow-bell tower, takes place during the reign of Louis IX, which makes it the case of the crown of thorns pending the construction of the Sainte chapelle. Successive phases of embellishment succeed then, first externally until the mid-fourteenth century, then in the interior decoration during the Renaissance. In the eighteenth century, violent changes were decided and transform the cathedral. Firstly, some of the medieval stained glass windows are removed and replaced with white glass, and the walls are whitewashed to increase the luminosity, and then part of the iconic central tympanum is broken to facilitate the processions. Finally, the spire was dismantled in 1786 before the Revolution came to transform the very use of Notre-Dame who, after being vandalized ( ornementations were broken and then removed in particular the 28 statues of the kings on the facade), became a temple of the Reason, then an warehouse. However, it quickly regained its Catholic spiritual use after the signing of the concordat in 1801. The Emperor Napoleon I can then celebrate his coronation in 1804 by hiding the abuses of the Revolution behind curtains, cardboard decorations imitating marble and coatings . The scene is immortalized by the painter David in his monumental painting visible in the Louvre Museum. After the end of the Napoleonic wars, the cathedral is in such a state that it is thought to destroy it. It is saved by a sudden revival of interest on the part of the population, following the publication of Victor Hugo's novel: Notre-Dame de Paris, in 1831. A gigantic renovation project was then entrusted to the architects Lassus and Viollet-le-duc who had just proved themselves on the site of the Sainte-Chapelle. An attempt was made to restore the ruined parts according to their original condition when possible, and examples were taken of buildings of the same period for ornamentation. A new arrow designed by Viollet-le-Duc is placed at the crossroads of the nave and the transept. After the restoration was completed in 1864, Baron Haussmann's work sanitized the cathedral's surroundings by removing several medieval structures to clear the view of Notre-Dame. The cathedral is then a peaceful witness of the two world wars, it hosts the celebration of the liberation of Paris in August 1944. It was not until the 1990s that a new construction site was set up to get rid of pollution that blackened its facade for centuries. At the beginning of the twenty-first century, it remains the main spiritual center of Paris and hosts most national commemorations and tributes. A restoration program on the spire and the sacristy had just been launched when, on April 15, 2019, a fire ravaged the wooden frame dating from the origins of the cathedral and caused the sagging of Viollet-le-Duc's spire, which was irreparably damaged. It is then announced that the cathedral will be rebuilt, the works of art that it contained (reliquaries and paintings) are moved to the Louvre museum for conservation-restoration.