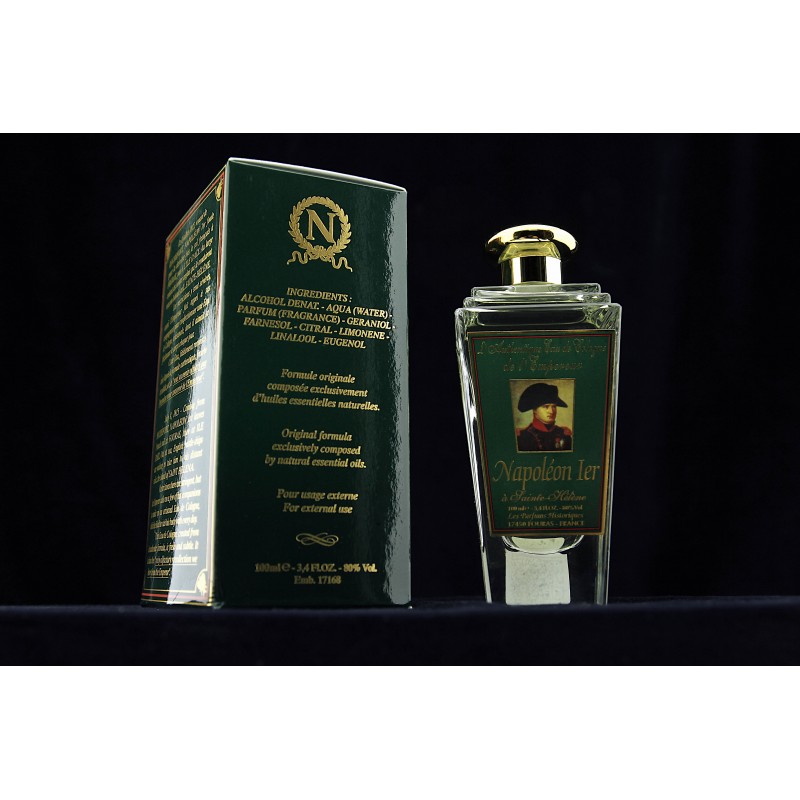 By buying this product you can collect up to 3 loyalty points. Your cart will total 3 points that can be converted into a voucher of 1,50 €.

Available in a stylish bottle, this cologne is the faithful and authentic reconstruction of the Eau de Cologne of the Emperor Napoleon I on St. Helena. It is now marketed with the kind permission of the owner of the document with the formula of the time.

It is composed of essential oils of natural origin, ethyl alcohol (87%) and water. Combining a range of fruit trees and herbs in a fresh composition and subtle, authentic Eau de Cologne Napoleon1 reflects the refined taste of the Emperor. The crystalline clarity of the bottle and cap golden emphasize transparency and luminosity of this high quality product. Each 100 ml bottle is presented in an elegant cardboard box with the colors of the Emperor. A small slip, clinging to the bottle with an elegant red silk ribbon, said the product's history.

Product of beauty and elegance for today's man as with woman, that Cologne is also a genuine collector's item. "The only olfactory memory that we could have kept the Emperor."
The history of Authentic Eau de Cologne of Napoleon 1st.

This Eau de Cologne, made at St. Helena returned following a recipe by the entourage of the emperor, takes part in this legend, because it is the result of the famine that prevailed at times on this island "prison" which was retained Emperor captive.

The restrictions are severe and the emperor no longer has at his disposal, this cologne he used usually in France at the beginning of his stay in St. Helena which he used as a friction abundant throughout the body after bathing in a protracted, according to his doctors, and intense heat that he loved.

What to do? There was no cologne in the island of St. Helena, the small population and pretty miserable. You can not buy it in Europe, delivery times are so long! Then the Emperor called on memories of his companions, consulting dictionaries that include up its library to make an Eau de Cologne handcrafted with the formula found in the papers of ALI. Valet Second Chamber of the Emperor at Saint Helena, whose real name Louis Etienne SAINT-DENIS, there is a Versailles born into a family of servants committed to the Palace of Versailles, which received a good education as he became clerk notary in Paris. Thanks to his father, ringmaster, who knew CAULAINCOURT he joined the crew of the house of the Emperor in 1806 and spent the second Mamluk as domestic services.

Then we gave him the nickname of Ali had brought before him one of the Mamelukes of the Guard. The "Hundred Days" in St. Helena, he never left the Emperor, proved tireless, dedicated, discreet, intelligent and with MARCHAND, the head valet, who became his friend, they made the two servants who softened the captivity by making their master all possible services. Scribe, librarian, valet, nurse, steward of the property of the Emperor at St. Helena where he established the inventory and which ensures the preservation and custody, he was one of the fundamental character of this pathetic little courtyard . The return of St. Helena he settled at Sens, where he became a citizen easy. He wrote the memoir in which he manifested an astonishing accuracy of memories. The testimony of one of the companions of the Emperor, Pons de l'Herault, he is the one that verifies the authenticity of the memories of everyone, as his visual memory remains prodigious and accurate.