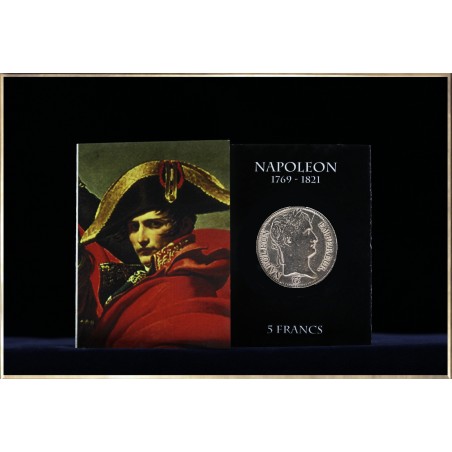 Reproduction of an ancient 5 Francs coin of  Napoleon from 1808, which remained in use till the 1st World War.

It was not until the Consulate that the first 1 Franc coins were issued, the famous Franc Germinal. "Five grammes of silver, 9/10 pure, constitute the monetary unit named Franc"; such was the description as it appeared in the new law defining the franc.

Adopted by Bonaparte on 28 March, 1803 and promulgated on 7 April of the same year (that is, 7 Germinal, An XI, hence the name Franc Germinal), this law fixed the weight and value for commercial transactions. In order to mint the new coinage, machines were required. And so, twenty of the cannon taken at Austerlitz were used to make the screw press still in use at the Monnaie de Paris and called the 'Balancier d'Austerlitz'.

The first 1 Franc piece bore the figure of the First Consul on the obverse or 'heads' side and the legend 'République française', the year and the value of the coin surrounded by a laurel crown on the reverse or 'tails' side. Half, quarter Francs, as well as 2 and 5 Franc pieces were minted using the same metal. 20 and 40 Franc pieces were made of gold. The Franc eloquently reveals the political development of the regime.

After the proclamation of Empire, a profile of the Emperor replaced that of the First Consul, but the reverse side still bore the words "République française"! It was not until after 1808 that the legend was changed to read "Empire français".


NEW ARTICLE IN ITS ORIGINAL PACKAGE.
Additional photos are available by mail upon request.