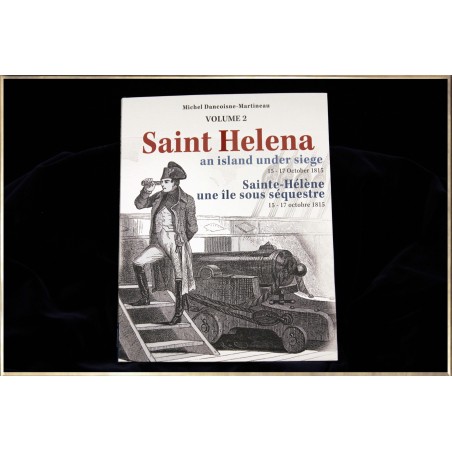 In a series of 12 volumes "Napoleon and St. Helena, the reef of an empire", Michel Dancoisne-Martineau, director of the French national territories on the island since 1987, describes the ties which bind Napoleon to St. Helena with many before unpublished documentation and illustrations.

On the evening of 14th October, Napoleon saw the silhouette of the island of which he knew little, apart from the fact that it was "very high up and very healthy".

After exactly three months on boats, one always feels a certain impatience to tread on a new island. But Napoleon needed even more patience in Saint Helena as, in fact, everything was administratively reorganised around his captivity. However, thanks to the administrative and management skills of Sir George Cockburn, everything was ready for him to disembark in just two days.

In this second volume, Michel Dancoisne-Martineau  answers these two questions by collecting, organising and using the reports and the social, economic, and financial data he has at his disposal. Without these prior socio-economic studies, it would have been very difficult to understand the years of exile, and some of the decisions taken in those years which seem incomprehensible today.

In the third volume, we will be continuing the story of Napoleon arriving on the island, and his first fifty-three days spent with the Balcombe, at the Briars.

Exceptionally, 100 copies of Michel Dancoisne-Martineau's last book "St. Helena and island under siege" Volume 2, from a forthcoming series of 12 volumes "Napoleon at St. Helena, the pitfall of an empire" are available at sale in France, in an original edition limited to 1000 copies ONLY, exclusively sold at the Longwood's House boutique in St. Helena and now on our webshop.

Numerous illustrations of which many have never been published

You may return most new, unopened items within 30 days of delivery for a full refund. We'll also pay the return shipping costs if the return is a result of our error (you received an incorrect or defective item, etc.).

You should expect to receive your refund within four weeks of giving your package to the return shipper, however, in many cases you will receive a refund more quickly. This time period includes the transit time for us to receive your return from the shipper (5 to 10 business days), the time it takes us to process your return once we receive it (3 to 5 business days), and the time it takes your bank to process our refund request (5 to 10 business days).

If you need to return an item, simply login to your account, view the order using the 'Complete Orders' link under the My Account menu and click the Return Item(s) button. We'll notify you via e-mail of your refund once we've received and processed the returned item.

We can ship to virtually any address in the world. Note that there are restrictions on some products, and some products cannot be shipped to international destinations.

Please also note that the shipping rates for many items we sell are weight-based. The weight of any such item can be found on its detail page. To reflect the policies of the shipping companies we use, all weights will be rounded up to the next full pound.