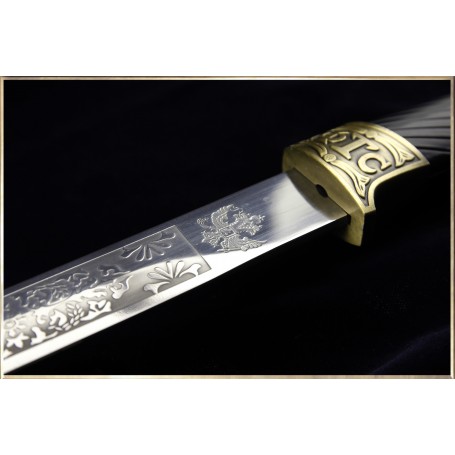 The Cossacks were a population of fierce horsemen from the steppes of southern Russia, united more by their lifestyle then by their ethnicity.
The Cossacks have attracted romantic authors for centuries because their combat embodied freedom and the fight against the authoritarian rule of the Tsars.

The use of the Shashka blade spread in the Caucasus in the 12th and 13th centuries before being adopted by the Don Cossacks. As the Russian state became more powerful, the Cossacks had sometimes the favors of the Tsars, and persecuted at other times.

At the 40th day after birth, every Cossack boy was dressed in a little armor and a small sword hanging at his side.
Then the father went to his mother with the words "Here is a Cossack for you."
At the age of 17, he was awarded with a Shashka by the village elderselders of the village.

The Shashka is the Cossacks main weapon and wears it with honor. Its symbolism makes it of sacred value for the Russian Cossacks.
As an example, during church service, the blade of the shashka had to be left half exposed, meaning that the Cossack was ready to defend Christendom.

The sword was passed from grandfather to grandson when "the old man had more strength left to wield it." If a Cossack had no male successors, then the shashka was broken in half and put into the coffin, alongside the deceased.
A Cossack could only lose its shashka alongside its head !