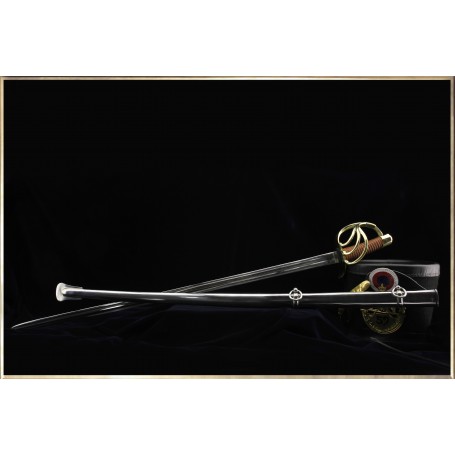 In 1801 the national factory of Klingenthal handles the production of the swords An IX model that equipped heavy cavalry units like the French cuirassiers. Having undergone some changes, especially at the tip of the sword that was brought in line with the extension of the blade, the sword had as successor the An XI and later the An XIII models. This is the model that we offer.

Also known as the "latte de cuirassier", this sword would eventually be a part of all the major battles of the Napoleonic Wars.

After the advent of the 1st Empire, the national factory becomes an imperial manufactory. The punch that you can see in the pictures above is a perfect copy, utilized by the factory from 1805 up to the fall of Napoleon.

Handmade, this sword is an exact copy of the cuirassier sword of 1st Empire. The blade is forged out of high quality iron and is flexible (see pictures).