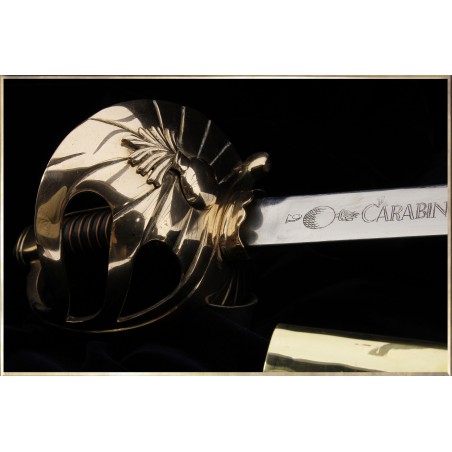 The Carabiniers are the elite of all the cavalry in which they are recruited. Like any elite corps, they like to keep some particularities and their saber is the best example. The Model Year IV Carabinier Sabre is actually just a "republicanization" of the 1777 model used by Monsieur ( the king's brother ). The difference is a simple change of ingravings, erasing the old royal arms for something much more sober saber "Carabiniers de la République Françoise" marked between a Phrygian cap and a grenade... These blades never carry the engravings of their manufacturer "Kligenthal" and have also a distinctive guard made out of red copper.

Other models were used by the Carabinier Regiments under the First Empire, but the particular attachment of these riders to their traditional sword and leather scabbard allowed them to keep it until the downfall of Napoleon.