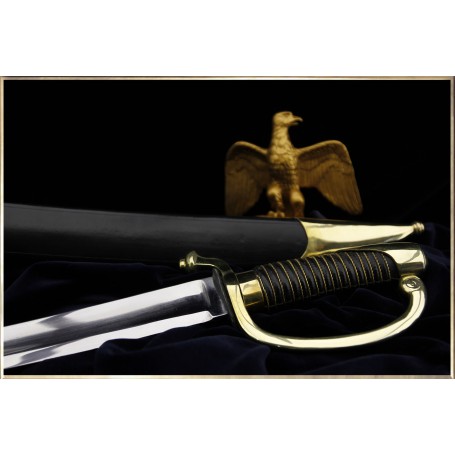 Sabre Briquet of the Imperial Guard

Sabre Briquet of the Imperial Guard

Like any elite corps, the infantry of Napoleon's Old Guard (grenadiers and chasseurs) held a distinguishable role and thus had better equipment and weapons. At the manufacture of Versailles, Nicolas-Noel Bouttet was commissioned in 1800 to manufacture a specific sword for the guard infantry. A first model, introduced in 1799, used the same shape as the blade of the Briquet sword of the line infantry. A second model is produced at the end of 1802, and until 1813. About 13 thousand were produced in Versailles and other 11000 at Klingethal. We do pressent this version of the sword in which the blade is a reproduction of the one made at Klingenthal and the handle in Versailles.